The 2020 Milton Maize Maze has been cancelled

The 2020 Maze will open on Saturday 18th July and close on Sunday 6th September.
Remember you can save yourself some money buying a Season Tickets with unlimited use throughout our Summer Season. This year our day tickets are even cheaper if you buy them online, remember that they are open tickets and are valid until the last day of the 2020 Maze on 6th September. To keep updated make sure that you join our mailing list below and follow us on Facebook to hear all our news on special offers.

2020
Join Farmer Rob and go on Safari! Navigate your way around the Maze exploring Africa and all its fascinating animals.

2019
We celebrated the 50th Anniversary of Man landing on the Moon.

2018
In 2018 our Maze to the form of a giant Unicorn and visitors discovered various Magical and Mythical Creatures on their way.

2017
In 2017 Farmer Rob created a Giant Castle in the Maze and visitors explored their way around from the dungeons up to the highest turret.

2016
This year the Maze was a Giant Galleon which was being attached by an Octopus! Visitors hunted for clues to find where the treasure was buried on Black Beard’s map.

2015
This year we went dinosaur mad at Milton with a 7 Acre Tyrannosaurus Rex. Visitors had to find their way around the maze counting dinosaur eggs before the dinosaur found them!

2014
This year saw a healthy eating theme with a Food Hunt to collect ingredients to make a meal with the Maze in the form our own Mr Cobby!

2013
This was a year of mind bending illusions with the maze taking the shape of a Penrose Triangle. Everyone was kept busy puzzling out the phantasmagorical mind benders which appeared throughout the maze.

2012
In 2012 Farmer Rob and his animal friends joined in with all the sporting celebrations with their own Animal Games Maze Challenge! Entrants found their way around the maze track and became a “Milton Maze Medallist!”

2011
Our theme for 2011 was Farmer Rob’s Maze Trap the Biggest Board Game in The World! Participants had to navigate their way through the maze without getting caught in one of the Maze Traps. 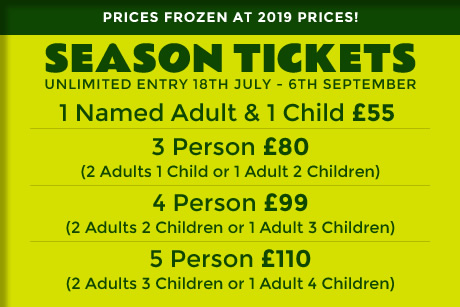 Please note we only allow 4 children per adult regardless of age. 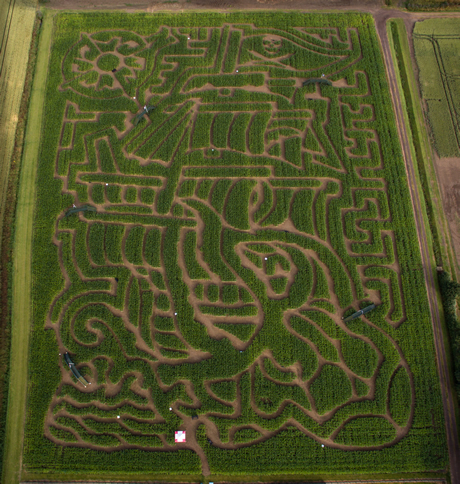 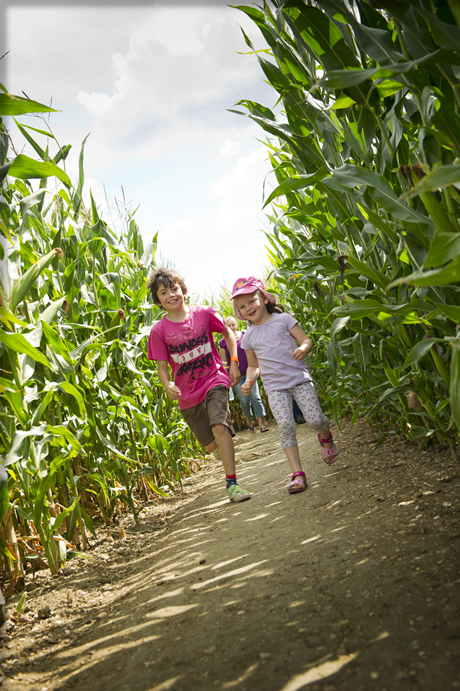 2010
In 2010 we celebrated the Anniversary of The Battle of Britain with a Spitfire Maze. Learning whilst you took part in the maze the historical facts about the Battle, the planes and the involvement of the local area.

2009
In 2009 we celebrated 200 years since the birth of Charles Darwin by creating an Evolutionary Adventure through the maze, visitors made discoveries by navigating to the Galapagos Islands within the maze finding clues as they went to find what creature they had become on our Giant Tree of Life.

2008
In 2008 we tried to raise awareness of the valuable work of The East Anglian Air Ambulance. Visitors found their way around the swooping helicopter maze finding facts about history of the Air ambulance and how may fire appliances were in Cambridgeshire!

2007
In 2007 we created a collage of Cambridge views with Kings College Chapel & The Mathematical Bridge. Some of Quiz questions we asked visitors were; which was the oldest Cambridge College, who founded Kings College and how long is the River Cam!

2006
We had an animal theme to our maze in 2006 with a maze medley of Farmyard animals. With animal related questions asking how many piglets does a sow have, what is the oldest recorded age of donkey?

After you have completed the maze there is plenty more to do. Tractor & trailer rides, Go Karts, Mini Golf & Giant Slides. All activities are included in the entrance price.

Opening Hours:
The 2020 Milton Maize Maze has been cancelled.